“….the whole firmament, over all the United States, being then, for hours, in fiery commotion! No celestial phenomenon has ever occurred in this country, since its first settlement, which was viewed with such an intense admiration by one class in the community, or with so much dread and alarm by another.” “Its sublimity and awful beauty still linger in many minds … Never did rain fall much thicker than the meteors fell toward the earth; east, west, north, and south, it was the same. In a word, the whole heavens seemed in motion. … The display, as described in Professor Silliman’s Journal, was seen all over North America. … From two o’clock until broad daylight, the sky being perfectly serene and cloudless, an incessant play of dazzlingly brilliant luminosities was kept up in the whole heavens.”
R.M. Devens, American Progress; or, The Great Events of the Greatest Century, 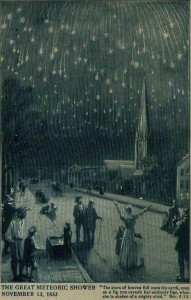 My Night the Stars Fell: 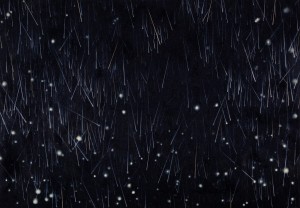 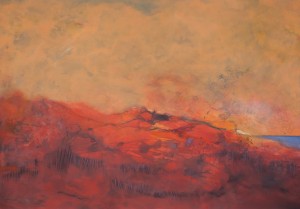 Backfire: to bring a result opposite to that which was planned
or expected: The plot backfired. OR to start a fire deliberately in
order to check a forest or prairie fire  by creating a barren
area in advance of it.

Take it to the Lizard

Stops along the way on Dis Astros 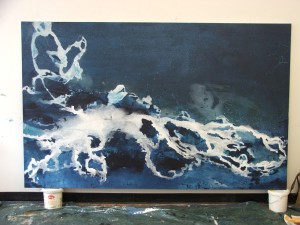 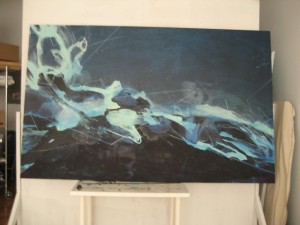 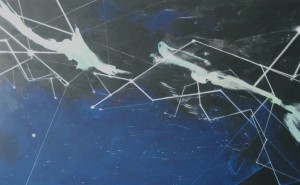 Below, The Final Dis Astros: 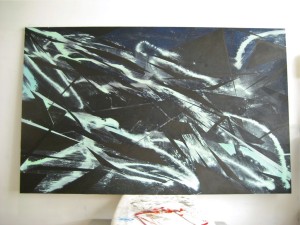 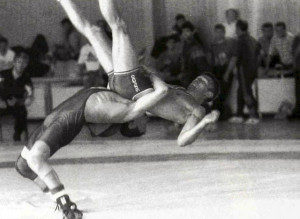 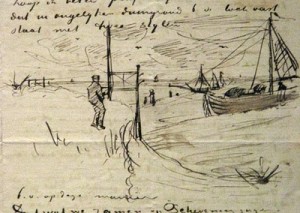 I never thought I would be the type to pine for 1991. Things haven’t been the same for me since as a girl, I saw Nirvana play San Francisco’s Cow Palace on New Years Eve. I am always trying to recreate the motion of the crowd that night. 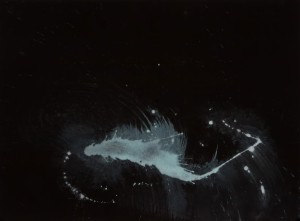 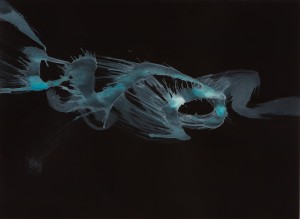 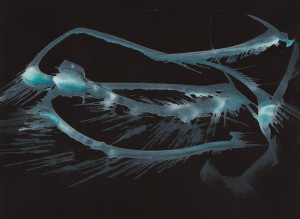 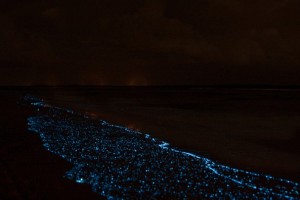 Last September in Southern California the red tide was blowing peoples minds. Tiny bioluminescent algae lit up the waves at night. The glowing surf has provided me with a point of origin for new work, coming soon. The way that the organisms glow when agitated is awesome. Check out this surfer agitating some algae: 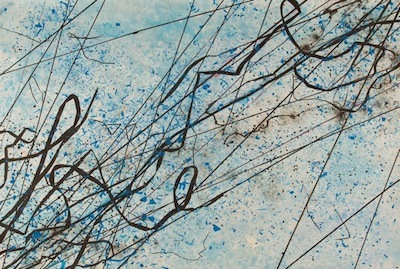 I have always been interested in small bits flying . 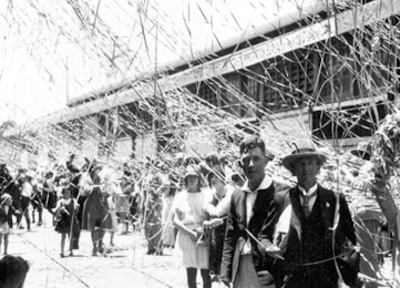 The tradition of a string connecting a person standing on a dock with a person departing on a ship until it pulls from both of their hands is an idea I will continue to spend time with.

Blizzard in the Studio 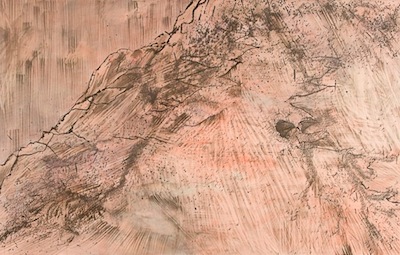 The painting above is called Switchback and it no longer exists. A big blizzard came to the mountain and this is now the  current state of the same canvas. It is currently called Drift: 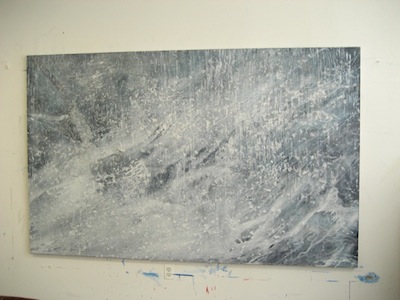 In Progress,  the color is not true in this photo.  I like the photo below of  the blizzard of 1888 and the fallen cables on Wall Street. 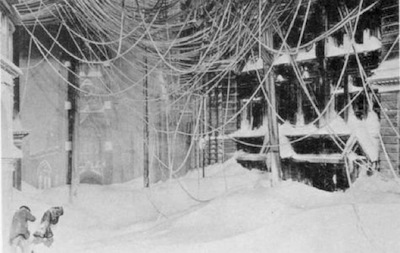 New York as the Milky Way 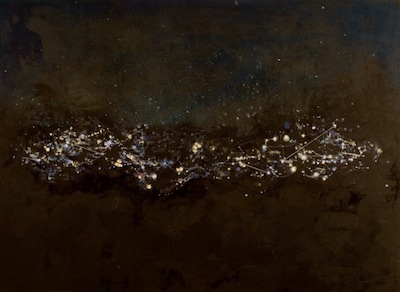 “ The electric telegraph is the miracle of modern times. . . a man may generate a spark at London which with one fiery leap, will return back under his hand and disappear, but in that moment of time it will have encompassed the planet on which we are whirling through space into eternity. That spark will be a human thought! “ 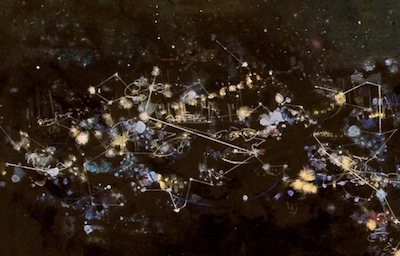 Heres a Detail of New York as The Milky Way

I’ve been reading about the dawn of the telegraph and electricity and how these inventions were received with skepticism and intrigue by people when they were first introduced. The general public opinion of the origin’s and meaning of electricity and how it would affect their relationship to nature and each other are all accurate in my opinion. People feared that their lives would accelerate and the cycles of nature, including our own as individuals, would scramble . New York was the first city to light up the night and one of the first to send and receive constant messages around the globe, so I painted it.

The continued outreach from New York of signals, satellite’s and lights into the night sky seems to me to be a reflection of the milky way.

Heres another quote written during the dawn of electricity:

“It has been the medium of all communication between mind and matter, brain and muscle, brain and brain; and in the phenomena of mesmerism and of pseudo-spiritualism, there is at least some reason to believe that, along air-lines and for indefinite distances, thoughts and words are sent with as unerring fidelity as marks their transmission on the artificial lightning-path. By the connection now established between distant cities and opposite hemispheres, we have but arrested, for a special subdivision of one among its many departments of service, a force which throbs from zone to zone, leaps from sky to earth, darts from earth to ocean, courses in the sap of the growing tree, runs along the nervous tissue of the living man, and can be commanded for the speaking wires simply because it is and works everywhere”.